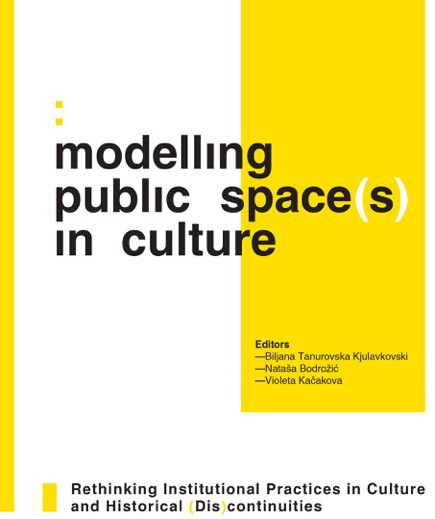 The Publication “Modeling Public Space(s) in Culture” is a continuation to the Conference Modelling Public Space(s) in Culture organised in Skopje, Kino Kultura in October 2017. The Conference aimed to offer diverse thematic overview on “public space” as a physical location creating social ties and “public sphere” as the collection of attributes contributing to the formation of public discourse. At the conference, public spaces were reviewed and discussed through two different aspects: 1/Revisionism and production of the history of culture and institution and 2/Reflection on the need for new models of public spaces in culture.

The first one, “Re-Assembling the Institution of Culture”, brings forward texts that analyse the notion of the institution and instituting, cultural policy and its relation to the institution, and critically reflecting on participation as a method in governing.
The second theme “Collective Instituting: Between ‘No Longer’ And ‘Not Yet’”, brings analyses and theoretical articulation of “destituent” spaces, thoughts about commoning, its genealogy and meaning, and proposes artistic and curatorial practices as a methodology for reformation of the public space and gives two artistic approaches in viewing the institution and its practices.
“Archaeologies of the Future”, the third theme delves in the realm of history and memory by examining (media) images, particularly those creating historical narratives, but also building (or replacing) personal and collective memory.

There are sixteen contributions in these thematic axes, and three case studies for the spaces concerned in the project. – Kino Kultura – Macedonia, Pioneer City – Serbia and Motel Togir – Croatia. The authors are from former Yugoslavia, Europe and beyond, all coming from different background – sociologists, scholars, academics, cultural workers, independent researchers, cultural policy experts, art and culture theorists, artists, activists, managers in culture, etc.

Doplgenger: Images of Past as Images for the Future